Solemother of the Month – April 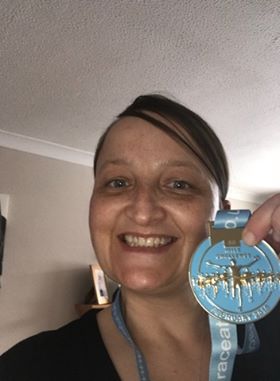 I love this time of the month where we get to celebrate another awesome ladies achievements.  Shelley has put in the miles in ALL weathers and has been so determined to achieve her self set goals. It has been inspiring to watch as Shelley quickly progressed through the couch to 5k programme supported by her fellow Solemothers. Like so many of us Shelley has to juggle a million things before setting out of the house but the Boothstown Selfies are amongst some of the smiliest/silliest! Shelley your efforts have been outstanding and your journey has only just begun. Over to Shelley…(but don’t be put off by the bad knee  LOL)

So, towards the end of last year my friend shared the sole mother page on face book, after seeing it several times I was intrigued, so had a nosy…
Fast forward a few months and after several conversations with my friend Sharon, I decided I would give it a go. I really wasn’t sure how I’d get on as I’d never ran, it was never my ‘thing’ but was willing to try anything to shift the baby weight.
So in January I started my ‘solemother’ journey. I found it hard at first, but as the weeks passed I found I had become addicted to running, she who doesn’t ‘do’ running now loves it! Wow!
Then I decided I would really push myself and do the 50mile run at your pace challenge for February and by the skin of my teeth I did it, but considering I had only started running at the beginning of January I was so chuffed with my self at how far I’d come in such a short space of time! However, I couldn’t of done it without the support of my lovely friend Sharon, and also being part of the solemother group and seeing so many inspiring fellow solemothers doing so well just spurred me to keep going! Sharon pushes me when I really need a kick up the bum and I’m grateful she does!  Sharon has also roped me into doing a boot camp class once a week along side our running – I want to say she’s wicked because I couldn’t walk for two days after the first class but I flipping loved it! I’m back on it with the running now and still loving it. Hopefully I’ll be able to set some new goals in the coming months and get my hands on some more shiny medals!