Solemothers of the month- November 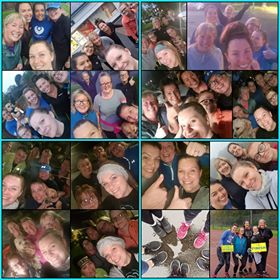 For the very first time in the history of Solemother; the Hood nominated a group of solemothers! We all looked on and watched this amazing bunch of strangers came together and  smashed the couch to 5k programme. Come rain or shine these solemothers ploughed through. Their journey has been an inspiration to so many and an absolute pleasure to follow.

The support, motivation, determination, fun and newly formed friendships shone from their awesome selfies. If you are in the Hood you know we are talking about ‘THE MCCOLL’S CREW’!

Helen
After many attempts at doing the c25k on my own,as I felt I was too rubbish, too slow to inflict myself on anyone else and never once managing to complete it. I resigned myself that I would never be a runner. I have been Facebook stalking solemothers for ages, cheered on all their amazing achievements. When Grace and the solemothers offered to help marshal the Urmston fun run in honour of my son Jude,who died from bone cancer last year. I was incredibly, incredibly touched. In the same week the mccolls massive started their C25k, the last push I needed to finally get running with a group. I am so glad I did! I have met an incredible bunch of women, so warm and welcoming, so supportive. Not only have I finished the C25k at long last but signed up for a 10k in March! Utterly unthinkable 9 weeks ago. My fitness has improved, the numbers on the scale look better and clothes beginning to fit again, but more importantly it has helped my confidence, my mental health and getting me through my grief. Anyone else out there silently stalking like I was, I urge you to just go for it you won’t regret it.
Linsey
Wowsers!!!! So proud!!!! Thank you Solemother’s for nominating our group!!!!! After 4 years on and off running solo, never feeling confident enough or ‘good enough’ to run with others, the opportunity to start c25k with new Solemothers appeared! Perfect timing for all of us! I have enjoyed every minute of our c25k journey, loving how our group kept growing, how others have joined us when their usual buddies have been unable to run, how we always make sure we get each other out, cheer each other on when we felt our legs wanted to stop! Not only have I finally achieved being able to run a proper distance, but I have gained this amazing bunch of friends! We have laughed, cried, ranted and moaned along the way……and we are not finished yet. Trafford 10k in March HERE WE COME! thank you ladies, this group means and does so much for me…mentally and physically!

Alison
One evening early September I was having a conversation with a member of the sole motherhood Nicola about what a fabulous time she was having with all these lovely ladies she’d met over the past year and admiring her collection of medals I was like I wish I could run she replied why don’t you do the couch to 5k and join the group here I’ll add you so she did next thing I added a post saying I’m an absolute beginner I can not run to save my life but I want to and I want to meet some lovely people like she had as being a stay at home mum working part time I love to have a good chat at the first opportunity. So I got a few responses and a meet was arranged probably by our admin manager Lynsey and before I knew Nicola was ringing on my way down wishing me luck making sure i wasn’t too nervous and I really was pooing myself and I have say that night I met the loveliest of new friends and the journey grew from there and more people joined the McColls massive it just got better and better. Nicola rang to check I was okay and survived and I said nic it was so good the people were amazing I didn’t even think about the running and the timing it was just so nice to meet you all and here your tales and reasons for doing this and we bonded instantly. I never thought I’m 1 million years I would do this run and I actually couldn’t do it on my own it’s only thanks to you guys that give me any determination and your lovely happy faces and positivity that I can do this. Thank you to each and everyone of you xx

Tracey
Who would have thought – 9 weeks ago I did not even know these Ladies, now look at us. After losing my Husband just over a year ago I needed to focus on something & whilst watching the Manchester Marathon I thought how inspirational all the runners were so I thought I’d give it a go (literally), fortune favours the brave! Here I am now after just completing the C25k & first event run & I can honestly say I could not have got this far without them. We are now looking forward to achieving our next goal together which is the Trafford 10k. Onwards & upwards, thanks for the love & support.

Josephine
When Alison asked me if I wanted to take part in the C25K with her, I was nervous but knew I had to do something to help lift my spirits and get me through an emotionally challenging time. I accepted the challenge and joined Sole Mothers! I hardly remember the first meeting outside McColls, I know I must have been nervous, not because I was worried about meeting new people, but because I was worried about how terrible I would be; I was so unfit! None of that mattered as the weeks progressed and the distances grew, so did the support from the group, and the McColls Crew grew bigger and stronger. The weekday evenings began to have more meaning and getting in from work wasn’t so grim. The sadness was replaced with muddy trainers, chatty hens, the odd tear and a lot of laughs! We’ve come along way since those 60 second killer runs to completing our first parkrun as a group! I am thankful to Alison for mentioning C25K to me all those weeks ago, and to the girls for putting up with me, and for the opportunity to become part of something brilliant. Thanks, Jo x

Emma
I had given running a go before. The general rule was to put my headphones in and then run like a mad man as fast as humanely possible until I could no longer breathe. I saw that there was a group running from McColls and realised that I had zero reason not to join in being that I live so close. So off I went. Over the past 9 weeks I have got to know these women better than some of the people I’ve known for years. The sense of camaraderie and positivity is only outweighed by our ability to moan about all of the things that have happened since the last time we met. There have been times that I didn’t really fancy going out or the weather was grim but knowing that everyone was waiting for me kept me motivated. So thank you guys! Honestly it has been the most fun I’ve had running in a very long time and there is NO WAY I would have done it without you all. Im glad we got together and toughed this out as a team. Here’s to many more

Joanne
This year has been a challenging year and I’ve found it particularly tough when running my own business that I’m the only employee! I also enjoy exercising and training for events but that also tends to be solo as its easier to deal with one busy Mums diary than two or more. I decided a couple of months a go that I miss the ‘social’ aspect that working with a team can bring. I don’t mean the after work drinks, I mean the chats whilst the kettle is boiling or on the way to the staff canteen. I also miss working together as a team on projects and seeing it through to the end and congratulating each other on our efforts and progress. I also miss sharing the load when work is hard work! I realised that I needed to be a bit more sociable and somehow needed to bring exercising and meeting people together. I had heard of Solemother before so got in touch on Facebook and quickly found out that there was a group of ladies that got together on my road. When I say my road, what I should say is at the end of my drive! I couldn’t believe that a group of really friendly and welcoming ladies had been meeting for a run at the end of my drive for a number of weeks and I didn’t know. I felt incredibly lucky that they were there when I really needed them and they probably didn’t even realise!!! I love running with my McColls Solemother crew. We have bonded so quickly and enjoyed motivating each other as the weeks have gone on. I feel like I have something to offer the group as I have about 20 years of running experience and I’m currently gaining my Level 2 Coaching qualification and that makes me feel really good about me which means a lot to me this year. When I go out running solo I love thinking about running and what I’ve learnt and how that might be relevant to other Solemothers and how it might help them with their running. I also love running into fellow Solemothers either when I’m running or in the school playground. Solemothers is a great group but it also made me feel part of the local community and made Home feel even more like Home.